Happy birthday
To me & Vuelta Ibiza

On Wednesday 13 April, my birthday no less, we flew at dawn from Eindhoven to Ibiza. About 2 hours and 20 minutes later we arrived on Spanish soil, where the shuttle service of the organization was already waiting for our motley crew of Belgians and Dutch. When we arrived at Hotel Puchet, we put our bikes back together again. (To be honest, that was my husband aka my technician) Unfortunately, it was a rainy day, but not to worry, better weather was on the way. So we postponed our reconnaissance tour until the next day. Fortunately, the weather gods were in our favor that day and we were able to ride the flight out of our legs. In the evening we went to the riders' village to get our numbers and attend the opening ceremony. In the goodie bag that we received upon registration, we found not only our numbers, but also lots of sports nutrition and a handsome, custom cycling shirt.

Upon seeing the stage schedule, it was immediately clear that it was going to be a tough Easter weekend. The kilometers in combination with the altimeters are not bad. Whether you're competing for the prizes or for 'touring', everyone sees off here. Although the beautiful views and often technical descents make up for a lot of course. 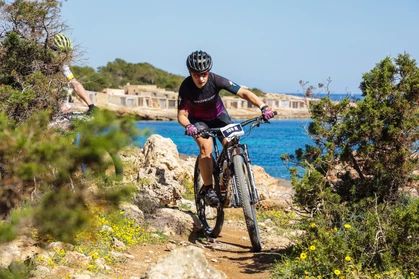 The starting point of the three-day event is traditionally Sant Antoni de Portmany, the second largest city of Ibiza, situated on the west coast of the island. For the start we went alternately to the capital Eivissa, Santa Eulària des Riu and Sant Antoni itself.

The ride schedule in a nutshell:

The altimeters speak for themselves, Ibiza is far from flat. So don't come here unprepared, because you won't make it to the finish. The steep wall that we were presented with on day 1 and that I knew from previous editions, I had repressed in my memory, but it was clearly still there. It seemed to have become even steeper this year. Although less training and that extra kilogram is undoubtedly a contributing factor. Fortunately, there were also descents, because what goes up, must come down. And what were they at times nice and technical. With the necessary enduro experience in our pocket, we slammed down the rocks and made up a lot of time where others were on foot. So on day 2 we rode to the 2nd place of the mixed teams.

The goal on day 3 was to cash in on that spot. The flat legs clearly thought differently and so we had to sweat for 55 kilometers with a 3rd place in the final classification as a result. Not a bad result after 2 years out of competition. Although, with better preparation, there could have been more. Reality check, there is clearly work to do. Results are not given away, no matter how much you like being on the bike. 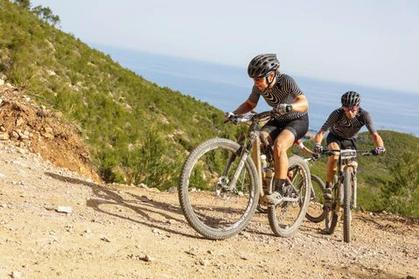 As for the organization, it is in 1 word unsurpassed. From needle to thread in order. The provisioning is unprecedented, both during and after the rides. Fruit, energy bars and ditto drinks, cookies and sweets, it's all there. Here you are not going to die of hunger or thirst. On day 2 there is even an extensive pasta buffet for all participants after the queen's ride. And those who survive day 3, can feast on a tasty BBQ with accompanying beers. Of course there is more than just food and drink, the signposting is also in perfect order. Brightly colored ribbons and enthusiastic signalmen on every corner will guide you to the finish. You won't easily drive the wrong way unless you are distracted by the umpteenth sky-blue bay you pass.

What is all this supposed to cost, I hear you thinking. Hold on, the basic registration package costs 180€ for the 3 days. Transfers can be booked with the organization for 45€. The organization then picks you up at the airport and you can also travel to the start by bus. We chose to do it by bike. When the weather is nice, we highly recommend this way, because you're already loosened up for what's to come.

Since Vuelta Ibiza falls just before the opening of big clubs like Ushaïa and Pacha, the hotel prices are also democratic. For just under 300€ you can get a 5-day room and breakfast in a good hotel. We stayed at Hotel Puchet, a four-star hotel a stone's throw from the arrival. There is a secure bicycle shed, so you can sleep on two ears. In addition, all materials for repairs and a pump are also provided. The breakfast is extensive, from bread, cereals and fruit to yogurt, in short, everything you need to recharge your batteries for a long day of racing. They are obviously used to welcoming cyclists here 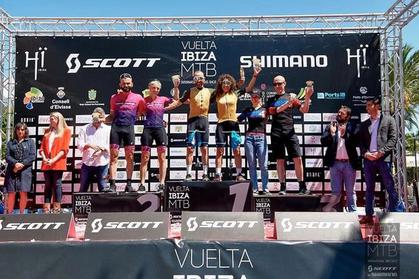